Announcing the Grant Awardees on behalf of the Willoughby MasterClass, Neil Cutler, commented “The concept of subsidising Juniors travel costs to a National tournament is in keeping with our vision of encouraging talented, junior players who represent the future of our game, to compete at the highest level.

When we announced our Fund raising initiative in February this year we were overwhelmed by the support of sponsors, and the broader community, who shared our vision and helped exceed our expectations”

This MasterClass initiative reflects our own philosophy of identifying, encouraging and developing children to enjoy one of only a handful of sports that they can continue to play throughout their lives. We have several MasterClass members who have enjoyed squash from their junior years right though their 70s and are competing in Pennant as well as State, National and International Master Tournaments”.

Four days after hosting the Salming Super 7’s Exhibition, you can still feel the energy left behind by the players and the ever-enthusiastic crowd. The night was a huge success and arguably one of the best run Squash Exhibitions Sydney has seen since the previous Salming Super 7’s event in 2016. The team at Squash Mechanics and Willoughby Squash Club spent countless hours putting everything together for a flawlessly executed night of Squash at its best. 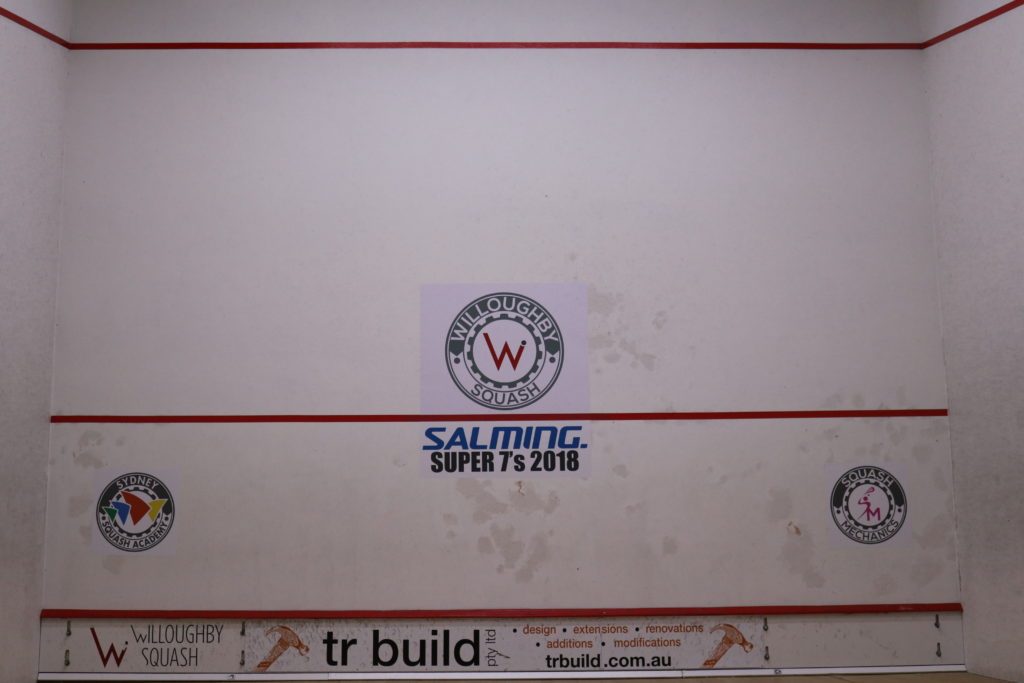 The day began with the scores of VIPs hitting with the professionals. Like kids waking up on Christmas Day, you could instantly feel the excitement of our VIP’s when they jumped on court with their heroes from the PSA World Tour. The hit consisted of some doubles and some shot and tactic based drills and routines, enlightening the VIP’s to new skills and techniques. A once in a lifetime opportunity and an unforgettable experience for all. 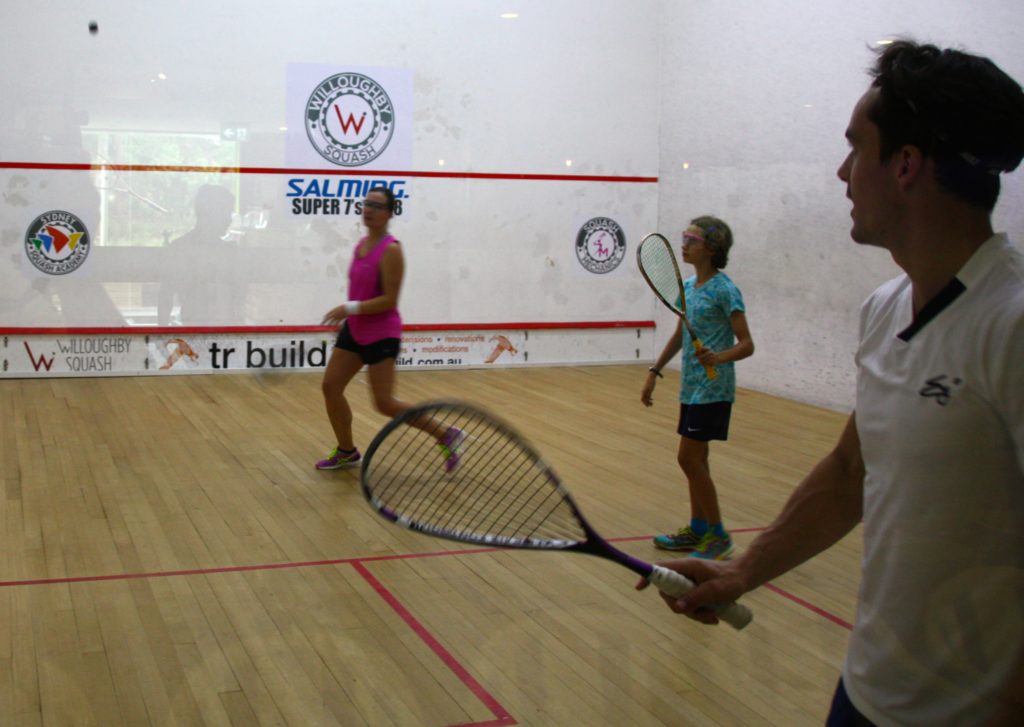 After a grueling session on the courts at Willoughby, the VIPs and Professionals took to the showers to freshen up for the next item on the agenda! The cooldown was aided by some cooling ales and ciders from one of the event sponsors, Young Henrys. The ever-popular “Newtowner”, “Natural Larger”, and “Summer Hop Ale” quickly quenched the efforts from the hit. This gave all our audience time to mingle with the players as they rolled through the doors in anticipation of the evening ahead.

The evening then proceeded to the Dining room upstairs. With the walls moved across on NSW only doubles & multi-purpose courts, the dining room greeted the guests with chandeliers hanging from the roof, reminding us of the great spectacle of the Tournament of Champions in New York. A projector played some of PSA Live TV’s best matches of 2018, and the black linen tablecloths were pressed and ready for the sumptuous feat ahead. As in 2016, the food was catered by Brett Deverall and the team at Sydney Cooking School. The dinner included Moroccan couscous, an amazing chicken curry, southern pulled pork burgers with coleslaw, Mediterranean pasta salad, and German hot dogs with sauerkraut and mustard. As our guests eagerly filled their plates to the brim our Staff were busy setting up a Live stream Broadcast to “The Roar”. We partnered with “The Roar” to deliver the event to more than 35,000 weekly viewers. 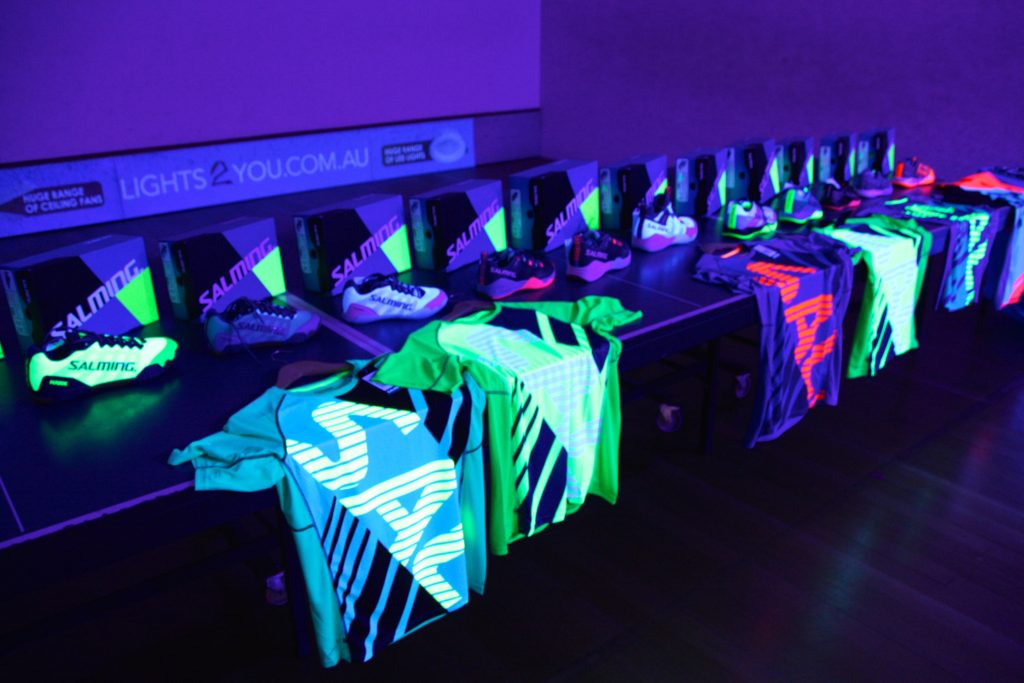 As the guests found their seats, the evenings MC and Australian Squash entrepreneur, Steve Walton, welcomed the guests and conducted a somewhat tongue in cheek but informative Q&A with the players. Nothing was off limits as the guests were wowed with stories from the tour, both past, and present. We missed the presence of the current Australian #1, Ryan Cuskelly, but luckily we had the footage from the recent World Teams Champs when he battled Kiwi Paul Coll in a 5 set grinder. Paul talked us through the “chicken dance” cramp that’s cusk suffered at the end of the fifth set. There was not a dry eye in the house, Hilarious. 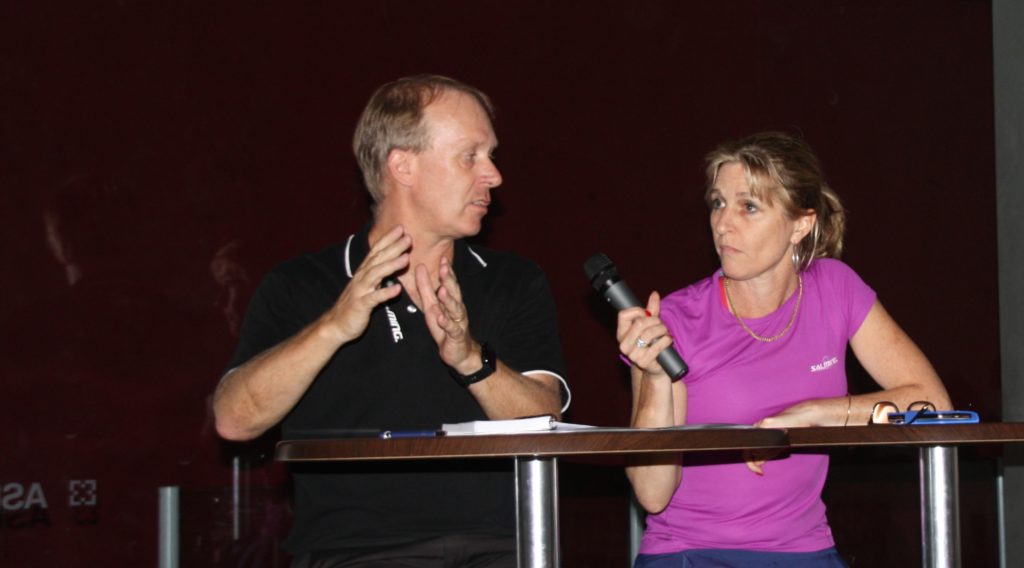 After gaining an insight into the minds of some of the greatest in the game the event moved downstairs to Willoughbys show court, the “TR Tank” The first piece of action had Commonwealth Gold Medalist,  Former World Number 1, and 5 x World Champion, Sarah Fitzgerald, go toe to toe with current Commonwealth Games representative, Christine Nunn. 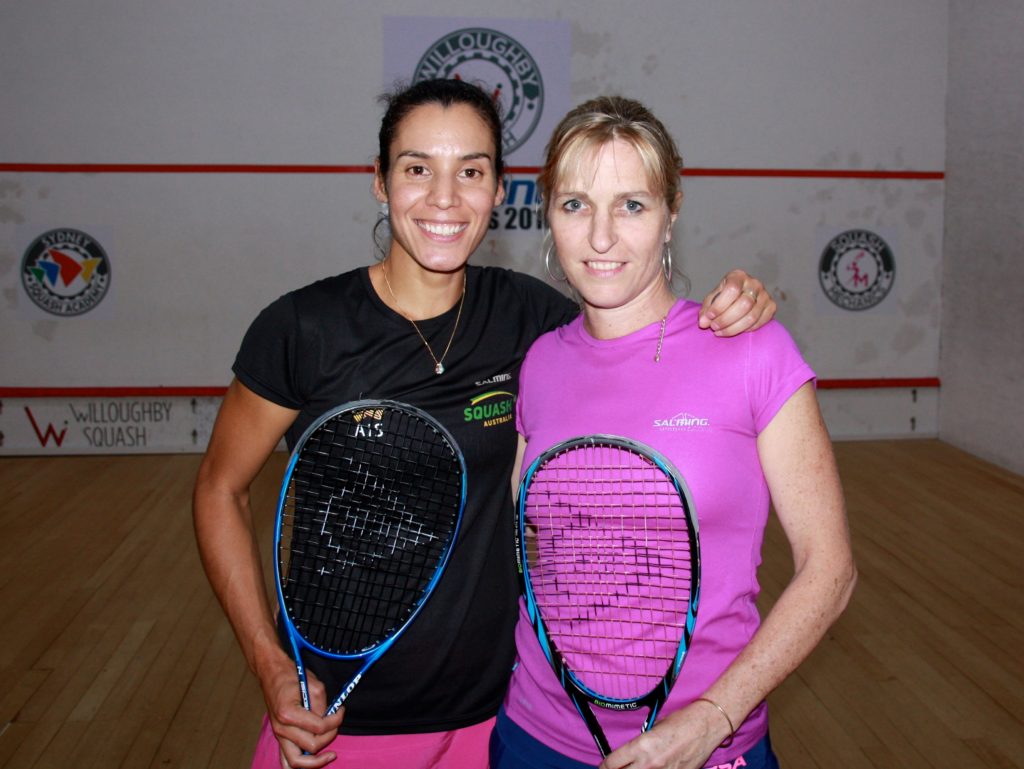 Their close relationship was on show as player and coach quickly settled into the first 7 minute set for the evening. They put on a spectacular show for our audience, slotting winners, blocking each other and regularly bantering with each other and the crowd! The student prevailed over the coach in an epic 3 set thriller.

After their exciting, and entertaining match it was time for the “Salming Speed Gun”. ExMed director, Dr. Matt Hollings, pulled out the Speed gun that he sneaked from NSW police earlier that week! This state of the art piece of sports science hardware included two 20 inch Display screens, clearly engaging the audience with every shot the pro’s hit. All of our pros matched their ability not only with each other but with members of the audience.

Christine was first managing a top speed of 213kph, then Squash Superstar Sarah Fitzgerald stepped up to the plate clocking 202kph. Then for the lads. Paul Coll was first, with an impressive arm swing he managed a top reading of 242 kph. Then up stepped “killer”. The crowd favorite scorched the ball almost through the front wall clocking the night’s top speed 250kph! Rex Hedrick managed a top speed of 213 kph, and Zac Alexander was so close to claiming the title clocking 249 kph! 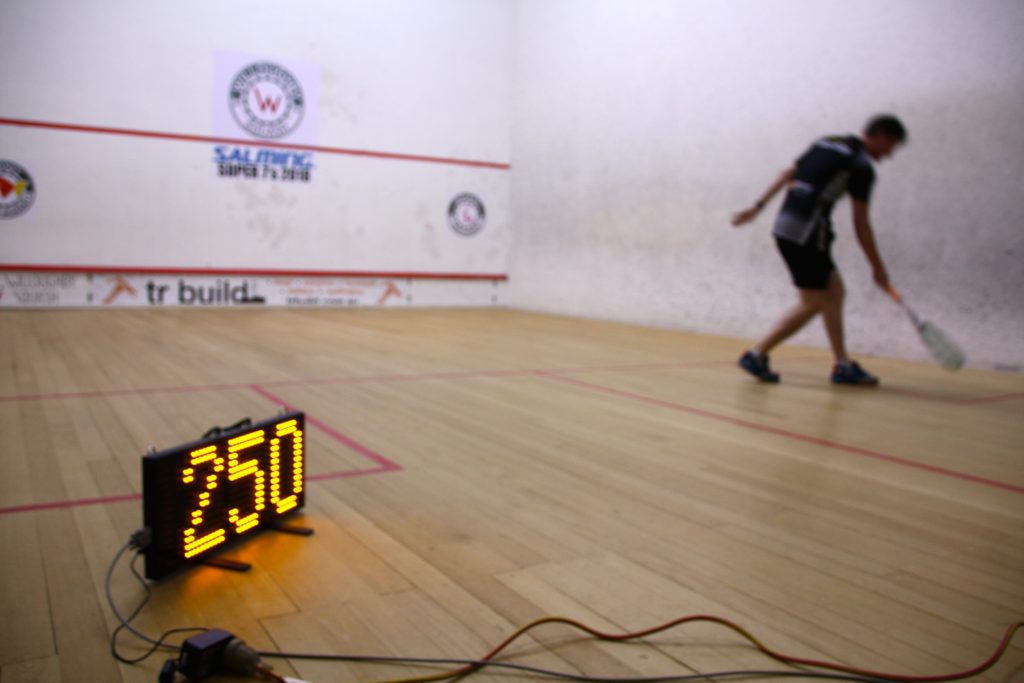 Next, it was time for a little bit of 4play action.The doubles set saw Sarah & Paul teamed up against Killer and Christine. This mixed doubles match between champions of past and present was a showcase of speed, agility, amazing retrieval and scintillating shots, in a spectacular and furious 7 min battle. 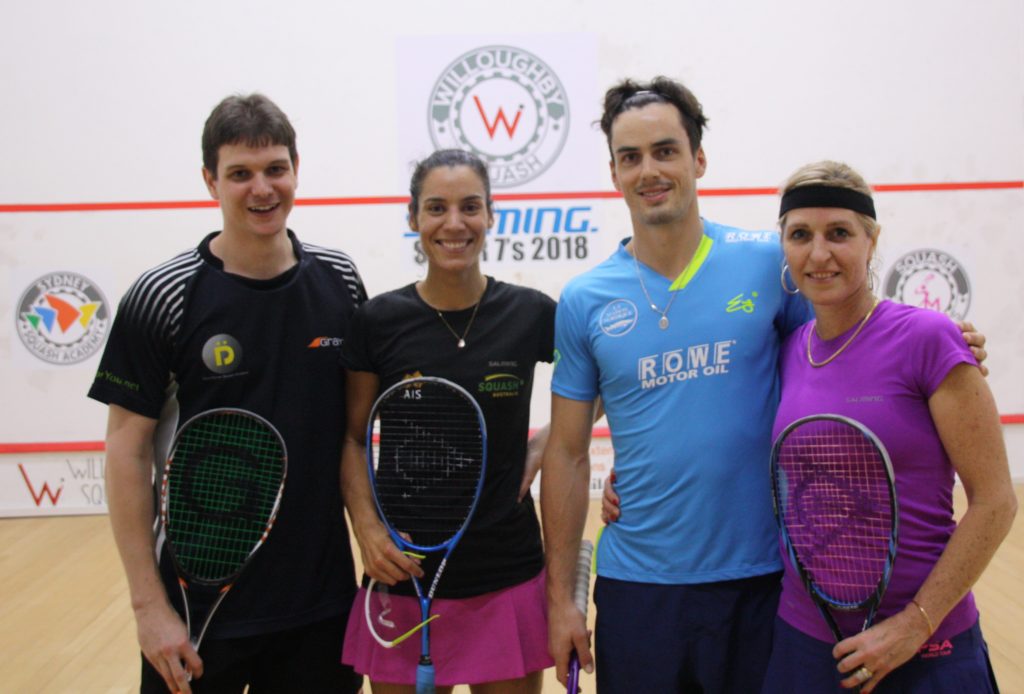 When the 4play action concluded we had a short break for guests to replenish their drinks as Squash Mechanics Pro and Westerfolds Sports Centre Manager, Rex Hedrick warmed up for his action-packed match against New Zealand #1, Paul Coll. Rex had the courage to wear a GoPro on his head, which surprisingly didn’t offset his balance considering the way it looked. Halfway through the match you could see the GoPro start affecting his playability and passing it off to the Superman himself, it didn’t take long for Clark Kent to throw it to the grandstands. 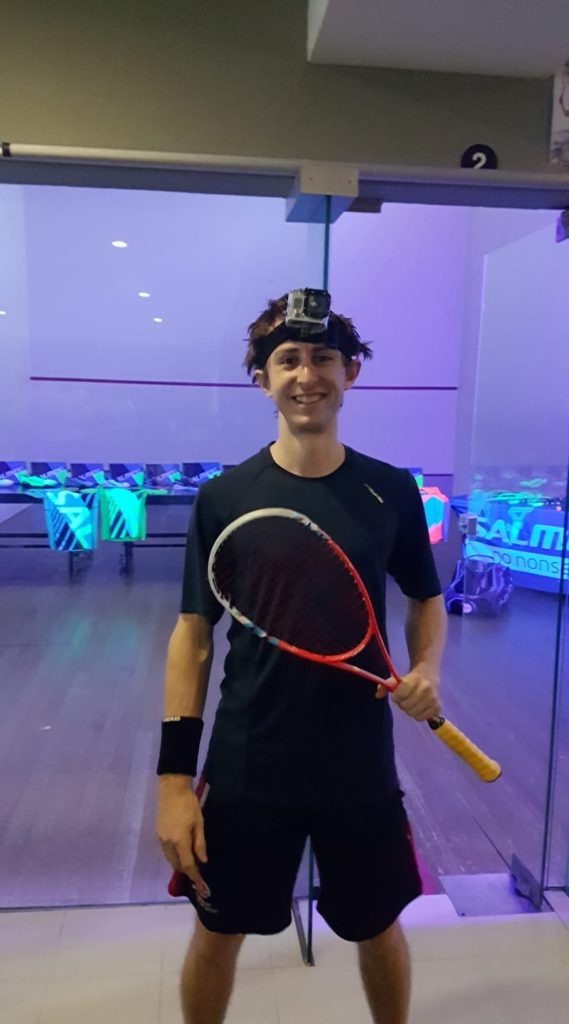 As the 7 min sessions progressed we saw all the players give it their all. Unlike shorter exhibition formats, the 7 min format allows the players to get settled in and really showcase their talents on the court. The players get warm and stay warm with the innovative and dramatic format created by the Squash Mechanics team.

Other evening highlights included Zach “The showman” Alexander, bringing out 2 rackets to battle the speed and retrieving skills of Paul Coll! Gotta say Zach would clean up most players with his left hand too! Then Zach faced Squash Mechanics Pro, Rex Hedrick. After some massive rallies, he asked the ref if he could blow his nose? He proceeded to pull out his hankey and drop dozens of five cent pieces all over the floor! What a time wasting masterpiece! Even though, the players then played the next few points dancing around the coins like revelers at Mardi Gras. 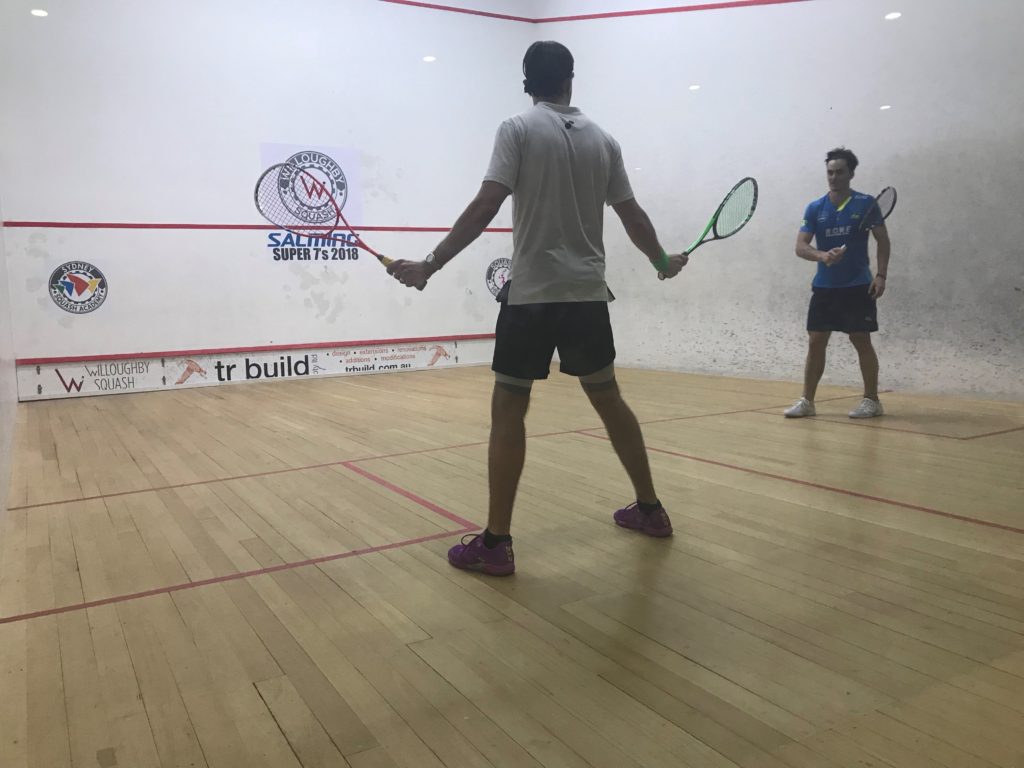 Paul’s physical strength began to shine through in his final match against Killer Karwalski! Rex and Zach decided to join Killer and battle the Kiwi superstar three v one! Even against these odds, Paul still managed to match the other three on court, bouncing between the three bodies like a pinball, picking up everything to the sheer delight of the crowd. 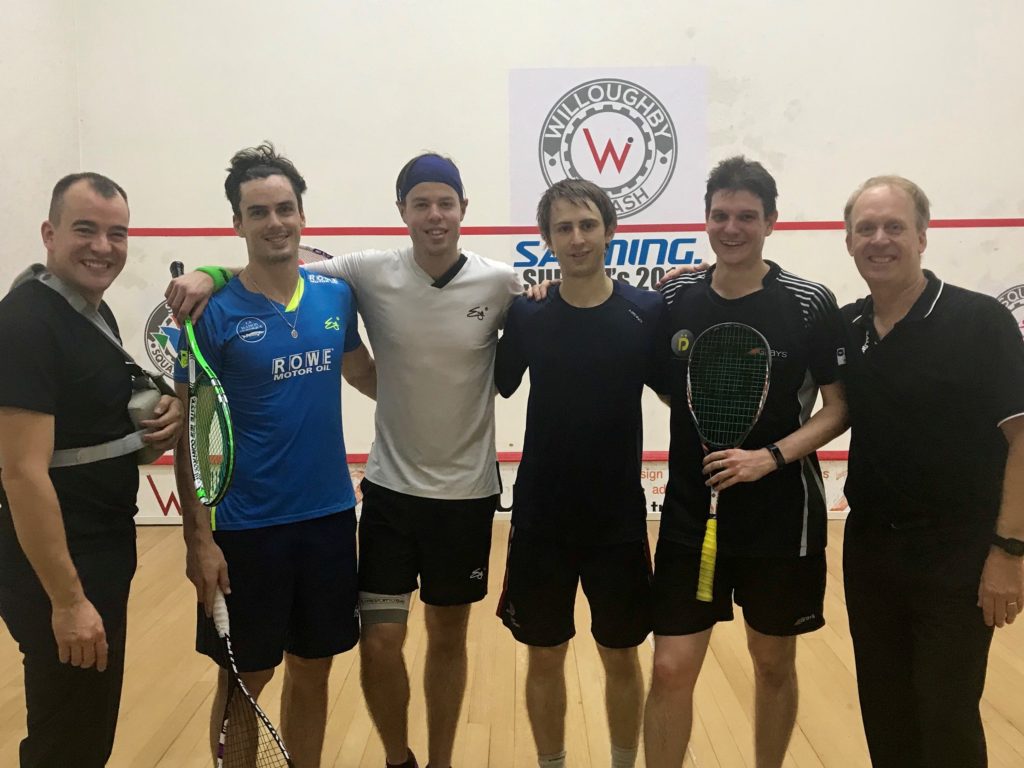 Squash Mechanics and Willoughby Squash Club would like to give special thanks to the sponsors of the event, Young Henrys, The Roar, ExMed, Sydney Cooking School,  Squash.com.au and of course Salming.

Such an amazing event could not happen without the Players. To Christine Nunn, Sarah Fitzgerald, Paul Coll, Rex Hedrick, Matthew Karwalski and Zach Alexander thank you for being part of the Salming Super 7’s 2018. Your professionalism, playing skills and sense of humor was greatly appreciated by all who attended the hugely successful event. We hope to see you all back for the 2019 installment.